Sergeant JJ Baldwin, was a Wireless Operator in 630 Lancaster Squadron from 1943 to 1945. He flew his first mission aged only 21. He was a joiner by trade and a pacifist by instinct. 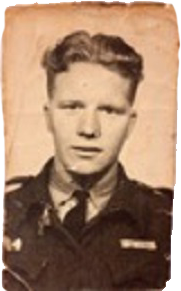 Following his father’s death, writer Bob Baldwin discovered log books detailing the raids his father flew. He also found a short story written by his father. This provided the inspiration for our play, Wireless Operator.

The more Bob read, the more he came to realise that there is a disturbing legacy to the Lancaster Bomber campaign; one that not only affected the rest of the lives of those who served, but also impacted the lives of their families.

This is now, of course, recognised as post-traumatic stress disorder.

We hope that Wireless Operator will serve to increase awareness of the legacy of PTSD, not only amongst those suffering right now, but also in those in whom it was unacknowledged and who struggled, unheard, for the rest of their lives.

Films and stories have tended to glamorize the harsh reality of serving as an airman in Bomber Command. The average age at death was 23. The odds of surviving a tour of duty of 30 sorties were the worst of all the armed forces. Only one in six would survive their first tour of duty and only one in forty a second. On average, the rear gunner would only survive five missions.

Flying was physically and mentally demanding. Fear was a constant companion. Conditions were cramped and uncomfortable, temperatures often dropping as low as -20°C. The corkscrew manoeuvre was a combination of rolls and dives to avoid enemy aircraft. This was often repeated over and over inducing weightlessness and terrible nausea. Generally flying at night, crew members were issued with amphetamines to keep them awake.

Allied bombing of German cities killed as many as 600,000 civilians. The young airmen were aware of what they were being asked to do. They were placed in an extreme situation where the normal rules of life no longer applied. They faced dilemmas requiring instant decisions yet with horrifying implications.

Returning home was still fraught with danger and many lost their lives on the way back.

Each of the seven men who comprised a Lancaster crew depended on each other. The crew resisted any member being replaced believing it would bring bad luck and reduce their odds of survival. Their day to day lives were unsettled. One moment they were fighting for their lives, involved in unimaginable violence and witnessing horrendous events. The next moment they could be at a local dance or in the pub.

Fear and exhaustion were the most common causes of combat stress for bomber crews. Bomber Command did nearly everything it could to keep the pilots flying, establishing a draconian system of military discipline. They devised the term LMF, ‘Lack of Moral Fibre’. It was used as a form of intimidation. Men with LMF were effectively branded as cowards, and their treatment was designed to humiliate and stigmatise. Men were stripped of their rank, and even paraded in public in their badgeless uniforms. Most airmen preferred to risk the odds they faced in the air.

Nothing could have prepared them emotionally. Many of the survivors would often go to extreme lengths to avoid reminders of the disturbing events which could trigger panic attacks, nightmares and flashbacks. Plagued by persistent feelings of fear, guilt, or shame they would withdraw from friends and family and lose interest in everyday activities. It was not unusual to feel guarded, irritable and angry with outbursts of reckless behaviour. Suicidal thoughts were common.

These are the symptoms of post-traumatic stress disorder.

Many survivors never talked about their suffering even to the closest members of their family but its impact affected them all.

Unlike the other military services, and despite suffering the highest of all casualty rates, members of bomber command were never awarded a campaign medal in recognition of their service. The government did not want to draw attention to the huge number of casualties inflicted on German civilians during allied bombing raids.

It was not until 28 June 2012, that the sacrifice of Bomber Command’s crews was finally recognised with the dedication of a national memorial in London’s Green Park. At the end of 2012 it was announced that veterans or their families could apply for a Bomber Command Clasp. However, many veterans and their families feel that not issuing a full campaign medal remains an insult.

We hope Wireless Operator will raises awareness about PTSD and it’s causes. We are supporting Combat Stress, the UK’s leading charity for veterans’ mental health charity. Help us to reach our target of donating £1,000 to this important charity.